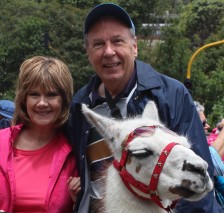 Our mission to Colombia marked our third time to take teams of Charis Bible College students to this South American nation; however, this trip was unique in that the team had quite an international flavor – of the fourteen members, two were from Indonesia, one was a Nigerian living in Canada, one was from Jamaica, one was of Korean descent, and one was half-Colombian.

Our ministry was centered in Bogotá and included a wide range of outreaches.  We were on the go every day from 8 AM to 10 PM, preaching in churches, ministering in rehab centers, evangelizing on the streets, and presenting chapel services in schools.  As you can imagine from an eight-day mission with this much ministry, there were too many testimonies to even begin to share them all.  However, let us share a few highlights.

The trip started with one almost insignificant event that showed us that God was orchestrating our steps.  Just before we left the US, a local pharmacy offered M&Ms on a free-after-rebate sale; so, we picked up a bag to give to our hosts in Colombia.  When Delron handed the package to our host, he excited exclaimed, “Oh, we’ve been looking for these!”  It turned out that another guest teacher was in town to teach at the local Bible college.  He had a lesson scheduled for the following day that was based around an illustration using M&Ms.  They had spent hours that very day looking in a number of local markets and stores for the M&Ms, but had not found them any place they had looked. 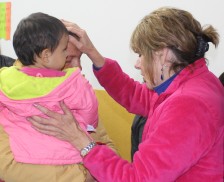 The street evangelism outreaches gave us many excellent opportunities to meet people right in the middle of their needs and bring them hope that is only possible in Christ.  As we were sharing with and praying for two ladies on the street in front of a hardware store, the clerk who was running the shop overheard our conversation and came out to the street to ask us to also pray for him.  When we invited him to the service at the church that evening, he responded that he had to work but would send his wife to the church to record the message so he could listen to it later.  As we were 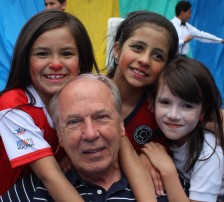 walking through a public park, we noticed a young man and his girlfriend sitting on a bench.  Since the girl was wrapping a bandage on her boyfriend’s ankle and foot, we approached them and asked how he had injured himself.  After he explained that it was a sports injury, we told him that we would like to pray for his foot to be healed.  When he granted us permission, we prayed in Jesus’ name and saw the pain instantly dissipate.  After the miraculous healing, Delron shared with him that Jesus wanted to heal his heart even more than He wanted to heal his body.  Within minutes, both the young man and his girlfriend were praying the sinner’s prayer.  In the meantime, three young boys had stopped to see what was going on.  When we asked them if they would also like to ask Jesus into their hearts, they readily agreed and prayed with us.  Just across the park, we met a gentleman who said that he needed prayer for a job because he was out of work due to having an injured hand.  After we prayed for his hand, he immediately recognized that something had happened and that his fingers were more flexible.  Of course, we offered him an opportunity to receive salvation and he gladly prayed with us. 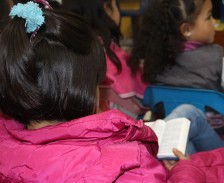 Another highlight was the afternoon we spent ministering at a rehab center where young ladies are being rescued from lives of prostitution and substance abuse.  Since many of the residents are in protective custody to protect them from their former pimps and dealers, we were not allowed to take pictures of the girls’ faces – a rule that was hard to abide by because we so desperately wanted to record the transformation from the scares of the devastation of their former lives to the joyous smiles birthed from the love of Jesus. 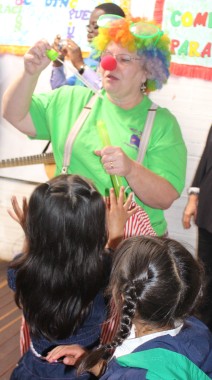 Even on our break when we went for a treat at a local ice cream parlor, we wound up leading the waitress to salvation and the baptism in the Holy Spirit.  When we saw tears of joy well up in her eyes because we had given her a generous tip, one of our team members realized that there was an open door to witness to her.  Within a few minutes, the whole team was on their feet, hugging and praying for the young lady as tears rolled down her cheeks.

By the time we headed for the airport to return to Colorado, more than one hundred Colombians had prayed to receive Christ.  In addition, we had also seen more than a hundred baptized in the Holy Spirit and many healed of all sorts of diseases, families restored, and depression and sadness replaced with joy and gladness.