I always tell my mission students that the number one rule for being a good missionary is to be flexible because nothing ever happens the way it is originally planned.  The recent Charis Bible College trip that I led to the South American country of Colombia was an excellent lesson to prove the point.  On one day we drove two hours from our base in Bogota to minister in a private school in a suburb city on top of the mountain range that surrounds the capital.  When we arrived, we received news that the program had been cancelled.  However, our host stopped by the local parochial school and enquired about the possibility of our presenting a chapel service there.  The school administrator gladly accepted our offer and arranged for us to return after a visit that we had scheduled with a nearby orphanage.  After presenting skits, playing games, and giving out gifts at the children’s home, we arrived punctually at the front door of the school – only to be greeted with news that the school board had overruled the administrator’s invitation. 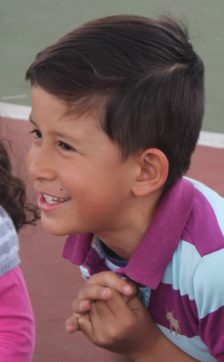 However, before we pulled out of the school’s parking lot, we received a message that the local public high school had opened their doors for the team to come for the full afternoon of activities with their four-hundred-member student body.  We were informed that the director of the school is an atheist; however, she was eager to offer her students an opportunity to interact with native English speakers even though she realized that our intent would be to incorporate the gospel into our time with the students.  The team presented a high-energy interactive program including skits dealing with the 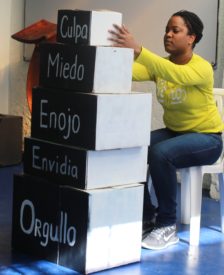 emotional difficulties that adolescents deal with, a dance routine that the high schoolers could join in with, and testimonies about how Jesus had rescued our team members from issues that these students were also subject to – abuse, peer pressure, drug and alcohol abuse, and promiscuity.  As we concluded the formal presentation, the English teacher (who happened to be a believer) requested that we extend our time to allow the students to practice their language skills by asking questions.  Each question proved to be an opportunity for the team members to share more details of their testimonies.  When we offered free copies of the gospel of John in Spanish, almost every student eagerly accepted with some asking for extra copies to take home to siblings and parents.  At another school, we had several hundred students gathered on the soccer field for an afternoon of 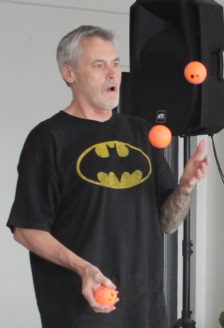 activities.  Just when we got them all on their feet ready for an interactive dance routine, the sound system went out.  So, we had to get them to sit back down on the ground for an alternate part of the program.  As soon as they were all seated, the music came on again.  So, we asked them to stand up again – just in time for the speaker to go out again.  Back down on the ground again, and the sound system decided to cooperate; back up on their feet, and it decided not to cooperate.  Believe it or not, this happened FIVE times!  But, my team just kept going in spite of the repeated difficulties – doing yoyo tricks, juggling, and anything else necessary to keep the students’ attention as we worked through the problems. 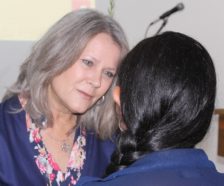 We also had opportunities to minister in other public schools and after-school programs in other suburb towns.  It was amazing how the administrators and staff at each school welcomed us and gave us total freedom to share the gospel through dramas, testimonies, and personal interaction – and expressed interest in having future teams come back for similar interactive sessions with the students.  Other ministry included presentations of skits and testimonies at a center for young women being rescued out of prostitution and men and women recovering from drug addiction.  All the residents eagerly came up for personal ministry and prayer and to receive free copies of the gospel of John.  Additionally, we spent one day doing manual service helping clean up the facility of ministry that rescues children from sexual abuse.  We also spent three afternoons sharing with individuals on the streets in different areas of town – simply having friendly

conversations, asking them if they have any prayer needs, giving candy and gospel bracelets to the children and gospels to the adults, and inviting them to a service that we would hold that evening in a local church.  Each time that we went out, people that we met on the street came to the service because of the invitations – and responded to the gospel presentation and were born again.  On Sunday, we had the privilege of ministering in two church services and and two children’s meetings in a nearby park.  Not only did the children for the church enjoy the games, object lessons, and gospel presentations, some neighborhood children stopped by to see what was going on and joined in with the service and came up for prayer at the end of the meeting.

Our flexibility paid off with many healings, salvations, and blessings in every place we visited.