Shortly after returning from the Dominican Republic. I had the privilege of leading a team of Charis Bible College students on a mission trip to “jolly ole England.” Not only was there a radical difference in the physical climate – from the tropical temperatures of the Caribbean nation of the Dominican Republic to the cold, damp weather of the British Isles – the spiritual climate was equally diverse. Because the people in the Dominican Republic are hungry and open to the Lord, we found them very responsive every time we went out to do street ministry. In stark contrast, the people of England are anti-religion and very resistant to anyone trying to share the gospel with them. I stood on the streets of the city of Walsall for two hours and asked the passersby if they would like the free literature that the team had brought with us or if they needed prayer for anything. The unanimous reaction was one of annoyance that anyone would interrupt their day with such intrusions. In the midst of all this rejection, the Lord assured me that no one was actually rejecting me; rather, they were rejecting Him. But, our confidence is that God has not rejected the people and nation of England. He can and will visit the nation just like He is invading other nations – even such as India and Nepal right now. If He cares for these Hindu nations, imagine how much more He longs to bless nations like England that have a rich Christian history and heritage! 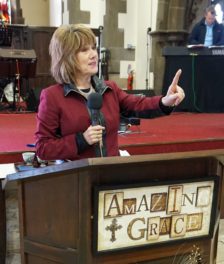 My main purpose in being in the United Kingdom was to bring the students from the Colorado campus to visit with and minister alongside the students from the two Charis Bible College extension campuses in England. I can honestly say that our team did a great job and saw how God could move through them.

One powerful example was the night that we ministered at a healing service. At the conclusion of the service, the student who had delivered the sermon had a word of knowledge that God wanted to heal someone with broken bones. A lady wearing a support boot and walking with crutches came forward and told the congregation that she could not stand on the broken foot because of a serious injury. After prayer, the student felt directed to instruct her to remove the boot and prove the Lord by standing on the injured foot. When she pulled her foot out of the boot, she was instantly healed and could not only stand and walk normally, but she could even jump up and down like the man who was healed at the Beautiful Gate in Acts chapter three.

We had another miraculous encounter the day we ministered in a prison. One of the inmates who was serving time for murder listened intently as one of the team members taught on what the Bible says about forgiveness. Amazingly, the mother of his victim had come to the prison the week before and told this man that she wanted him to know that she had forgiven him for taking her son’s life and that she was praying for him. The message on God’s forgiveness was exactly what he needed to decide to give his life to Christ and accept His forgiveness and reconciliation. After a tearful prayer, the room was filled with joy and celebration!

We were also invited to a church in the inner city where we ministered to former addicts and homeless people. We found them to be very open to the Lord and receptive of our messages. One gentleman came to me saying that he was suffering from severe pain and arthritis in his knees. I found out that he had been a physician in another country but lost everything and wound up destitute and alone. As I prayed for him, he was instantly healed and – with tears streaming down his face – kept saying to me that with his “physician’s mind” he couldn’t believe what had just happened to him. As we parted ways that evening, he was filled with joy – and I believe that he also had hope to get his life “back on track.”

My visit among these homeless people and addicts reminded me so much of the story that Jesus told of a king who prepared a great banquet but none of the invited guests wanted to come. He then sent his servants out into the highways and byways to bring in the forgotten members of society to fill the banquet hall and enjoy the lavish dinner. All over the world, the people who have “nothing” who are the ones who are finding “something” – the Pearl of Great Price – and ending up having “it all” as they embrace the Lord and all that He has for them.