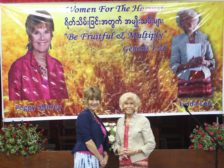 Linda Easton and I traveled to the nation of Myanmar (formerly known as Burma) to hold two women’s conferences and several church meetings in the two cities of Yangon and Kalay – the first ever Christian women’s conference in their city.

We found the women of Myanmar to be very open to our ministry as we watched them readily receive impartations of the Holy Spirit with each prayer.  In fact, Linda and I remarked to each other that we felt as if we were experiencing the book of Acts right here in the twenty-first century as the Holy Spirit’s presence was so powerful.  Many times when we went to lay hands on them, the women would just collapse because the power of God was so strong.

It is said that expectancy is the breeding ground for miracles, and the women there certainly were expectant – and they did receive the miracles they were believing for.  Even before the meetings started, our host brought a relative whose arm was totally immobilized as the result of a stroke.  After we prayed for her, her arm was completely healed and she was able to raise it and move it around. END_OF_DOCUMENT_TOKEN_TO_BE_REPLACED 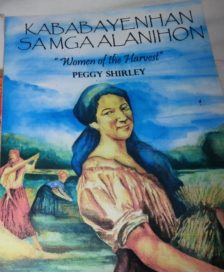 While vacationing in the Bahamas a few years ago, my husband and I joined a local congregation for the Sunday morning service – not expecting anything other than a good time of worship and fellowship.  However, that all that changed when the associate pastor stepped up to the pulpit to greed the visitors.  Rather than a casual “Thank you for joining us today,” he said that he had a prophetic word for us and then proceeded to point to my husband and prophesy.  Having never met my husband or me and not knowing anything about us, he began to “read our mail,” by saying that my husband was a writer and that his books would be published all over the world.  Then he turned to me and really shocked the both of us by saying that my book would go even farther than my husband’s books. END_OF_DOCUMENT_TOKEN_TO_BE_REPLACED

Delron’s visit to the Buddhist nation of Myanmar coincided with the two hundredth anniversary of one of the most significant dates in missions history.  In 1813, Adoniram Judson, who originally set sail from the United States on his way to India as a very first American missionary but changed his course on the journey across the Pacific, landed in Burma and introduced Christianity into the nation.

Although Peggy had been there a couple times in the past few years, this was Delron’s first visit since he was there in 2007 during what became known as the Saffron Revolution, named after the saffron-colored robes of the Buddhist monks who led this particular freedom movement.  Myanmar has consistently ranked near the top of the list of the most oppressive governments and near the bottom of the list of nations where human rights are honored.  It was from this environment that Dong Mang came to the US to study at Lester Sumrall’s World Bible College where Delron served as dean.  And it was back into this environment that Dong returned after his graduation, determined to build a church and open a Bible college just blocks away from the government headquarters right in the center of the capitol city.  Not only did he succeed in this heavenly vision, but he also gained a place of prominence in the Body of Christ in the city of Yangon and throughout the nation.

On this visit to Myanmar (sometimes also referred to by its former name of Burma), Delron was impressed by all the changes that had occurred in the country since his last visit.  There is a new spirit of freedom and prosperity.  The United States, who in protest of the oppressive government had for many years refused to post an official delegation in the country, has a big new embassy in Yangon; the streets are congested with shiny new Toyotas; and the people talk and live with a new freedom without whispering or looking over their shoulders.

He began his ministry in Myanmar by preaching at the Sunday service at Dong’s church, Yangon Christian Center.  The next day, he spoke at a citywide gathering for the Global Day of Prayer.  The event, chaired by Dong and his wife Lun, brought approximately four hundred of the Christian leaders in the city together to pray for their nation and the Body of Christ in general.  When Delron mentioned to Lun that it was impressive to see a woman take such a strong leadership role in such a significant event in an Asian country, she replied, “I got the anointing from Peggy Shirley.”  She also takes a leadership role in other citywide and even national ministry events such as a children’s crusade that began the day that Delron left the country.  This outreach was anticipated to draw as many as five thousand kids.

The following three days, Delron taught full-day sessions in an intensive leadership course based on his new book Interfaces.  The theme of the conference, which involved leaders from eighteen churches in and around Yangon plus a number of Bible college students, was that Christians must learn how to recognize the open doors of influence in society that God has set before them and learn how to take hold of the resources that God is willing to release into their hands so that they can boldly take advantage of all the opportunities that God has given them to make a difference in the world they live in.  Although this new book is not available in Burmese, each delegate was presented with a free Burmese copy of Finally, My Brethren.  In light of the new freedom in the country, all the delegates recognized that the message was not only challenging and inspiring but also very timely.  They left the conference inspired and fired up to take their place of influence in Myanmar the world.

One particular young man deserves special mention.  During the lunch break on the second day of the conference, Delron was prompted to call one Bible college student over to join him at his table.  Having noticed the young man’s passion during the praise and worship time each morning and the intensity with which he focused on each word during the teaching as he took thorough notes, Delron was especially drawn to him and wanted to know a little of his testimony.  Tun Tun Lay was the only Christian in his family and had made a significant decision to leave his village and Buddhist family to come to the city to attend Bible school.  His zeal was more than evident as he described his calling to return to his home to see his family and village come to the Lord and then to expand his ministry into a source of change to bring his people out of poverty.  Almost as if his mother had given him a prophetic name in that his Burmese name translates into English as “Light,” Tun Tun Lay radiated the love and life of Jesus.  But he also added that he had been suffering from a liver disease for about five years and that the medication he was taking—when he could afford to purchase it—had not made any difference.  Delron prayed for him and rebuked the disease.  The next morning, the young man returned to the conference with an even bigger grin than usual and announced that all the symptoms of the disease were gone.  “I’m healing!  I’m healing!” he shouted.

It was not until two months after the trip that the full significance of this trip came into focus.  Eight weeks after Delron had preached at the church in Yangon, Dong Mang suddenly collapsed and died right in the middle of preaching the Sunday morning sermon.  This is, of course, a tragic event; however, it is a wonderful testimony that he was working for the Lord right up to the last second.  Delron said that he felt that there was some special significance to the fact that he had accepted Dong’s invitation to come to Yangon this particular spring after not being able to visit him for about six years.  He was there as one of Dong’s last guests — if not the last one — before his death!

In October of 2011, Peggy and Linda Easton (a member of the TAN board of directors) traveled to Thailand and Myanmar, ministering and teaching in thirty-two meetings during their twenty-day mission trip.  They were hosted in Myanmar by Pastor Dong Mang who had been a student of Peggy’s at World Harvest Bible College in the 1980s.  While still in school, he had told Peggy that one day she would be teaching her class to his ladies in Burma.  Pastor Mang has a real heart to train and teach women to be all that God has called them to be and has had Peggy’s Women for the Harvest book and syllabus translated into their local language.

Peggy and Linda started their ministry in Yangon with a packed church of eager learners—one hundred twenty-five ladies from sixty different churches.  For hours, the women sat and took notes—so eager to learn, so eager to be used by God.  Many came to receive the baptism in the Holy Spirit and to receive the power so that they could actually fulfill their dream of reaching their tribe.  Many more came to be released to operate in their gifts.  Peggy commented that there is nothing like a woman mentoring another woman to step out and use what she has.  All that many of these women needed was the example they saw in Peggy and Linda and permission to be used in the ministry.  Then they received the freedom to decide to do what they sensed God was putting on their hearts.

Next, they traveled to Mandalay, a city where tourists flock in to see the Buddhist pagodas and shrines.  The ladies did visit one Buddhist temple where they watched intently as the poor, deceived people knelt and bowed before a dead Buddhist statue.  They were saddened to watch as some of the devotees bought sheets of gold to rub onto the huge Buddha statue.  Peggy commented that it not only brought tears to her eyes but also an even stronger determination to raise up women to go out and teach deceived people the truth about our living God, Jesus Christ.  The women’s conference in Mandalay was the first they had ever had.  Forty women came forward to be released into the five-fold ministry.  Linda and Peggy remarked that they felt like they were in the book of Acts when these women came up for prayer because all they were in one accord as the Spirit fell on them; they
were crying, laughing, shaking, and spontaneously falling out in the Spirit.

Pastor Mang commented that God used this mission to answer the prayers of the Burmese people through the scriptures: “I will pour water upon him who is thirsty, and floods upon the dry ground…Behold, I am doing a new thing!  Now it springs forth.” (Isaiah 44:3, 43:19-20).  He said that he believes that God will bring Peggy and Linda back to Myanmar next year and that they are already looking for bigger facility to hold next year’s meetings in Mandalay.  He is also making plans to travel to other areas of Myanmar to teach Peggy’s materials because the people, especially the women, desperately need the touch of God and need to be equipped for the harvest.